After recently serving with the Blyth Volunteer Lifeboat organisation, the former RNLI St Peter Port, Geurnsey Lifeboat – 52′ Arun Class, Sir William Arnold is undergoing restoration in Amble, Northumberland, before taking up a planned new London based educational role in early 2020.
The 1973 built ON1025 served at St. Peter Port from 1973 – 1997 before being sold out of RNLI service in 1998. She won her crews many gallantry medals during her service in the Channel Islands, probably the most famous being the Bonita shout in December 1981.
After being sold out of RNLI service she was renamed respectively; “Our Lady”, “Theocrat” and “Samuel J”, now pleasingly she has reverted to her original RNLI name. She was in effect the second prototype Arun Class Lifeboat following on from the 1971 built 52-01 “Arun”, also featuring a double diagonal mahogany hull and aluminium superstructure but of a design unique to 52-02. Later Arun Class Lifeboats followed the basic superstructure design of 52-03 up until the final 1990 built Arun Class Lifeboat 52-46, ON1160 “Duke of Atholl”, all GRP hulled after the initial three wooden and one Corten steel hulled boats.
Once completed the new owners plan to use her as an innovative floating education and experience centre based in London’s St Katharine Docks. She will host RYA shore based training courses and team building events, with additional opportunities for visits, tours and talks.
New owner Colin Trowles plans to sail her down the east coast of England from Amble to London in late December 2019 / early January 2020, stopping off at various lifeboat stations on the way.
Colin said; “We want to use this opportunity to raise money for the RNLI on the way and we’re looking for potential sponsorship for the many sea miles we’ll be covering. We will be stopping off at numerous lifeboat stations on the way, giving people the chance to come and have a look at her (subject to accessibility). Our progress can be followed via our website (currently under construction ) Twitter; Lifeboat 52-02 @GuernseyHero, instagram and very soon our own Facebook page.” 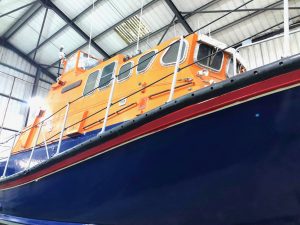 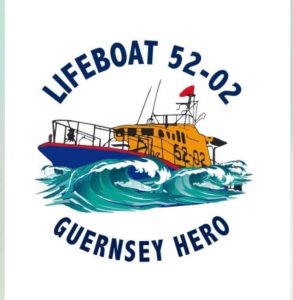 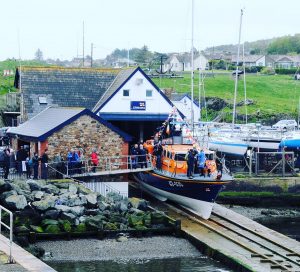 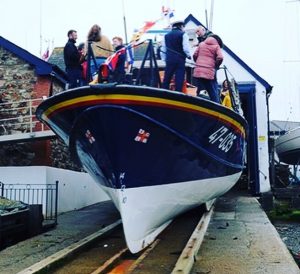 The Solent Class Lifeboats are inherently self righting using a combination of bouyant air tight cabins and am 8 ton iron keel without any other mechanical devices to achive this,  simple but effective.

Impressively one Solent class lifeboat, a MK2 built in 1973, currently (2017) remains in full SAR service for the Uraguay lifeboat service.  Additionally another two Solent class lifeboats (“City of Birmingham” in Uraguay and “R. Hope Roberts” in Australia respectively) only retired 2 years ago, a testament to the excellent design amd build quality of the class.

Weighing in at overall of 28 tons, Solents have a hull contructed from self weathering 6mm Corten Steel plate on an internal rib structure. This features a double bottom (skin) under the engine room and the hulls have proven to be very durable nearly 50 years on. The superstructure (cabin) is contructed from top grade marine grade Aluminium, again proving to be very durable. Of course as RNLI boats the Solents were immaculately maintained (mostly in boat houses) during their service days which has no doubt contributed significantly to their longevity!

The Solents are essentially a Mk3 version of the RNLI’s wooden hulled, water ballast self righting Mk2 48′ 6″ oakley class lifeboats but were considered different enough with their steel hulls, twin rudders and inherrent self righting system (all features well proven with the USCG and RNLI Waveney Class 44′ Lifeboats) to be given a new class name. Other than the smaller 37′ wooden Rother Class boats (built up to 1982), the Solent Class was the arguably the ultimate version of the classic double ended lifeboat hull design that dates from the 1800s!

All Solents were designed to be able to be slipway launched and housed in the existing RNLI boat houses current at the time of their commissioning (1969 through 1973), as indeed were the later Tyne class boats. The relatively compact dimensions of the boat houses dictated a low superstructure height (limiting visability to a degree at sea) and a folding mast/radar scanner. (Only relatively recently, are new boathouses being built to allow a higher superstructure profile on the latest slipway launching tamar class lifeboats.)

The Solents also marked the unltimate chapter of RNLI Lifeboats featuring the wonderful engines manufactured by Gardner, in this case specifically, an installation of twin, contra-rotating Gardner 6LX engines, each of 10,450cc and 110hp with electric and emergency manual starting systems, remote, belt driven high output 24v CAV alternators. The 6LX engines (as with all traditional Gardners) are reliable, slow revving, produce high torque and are truly economical in terms of fuel consumption. The hull design of the Solents (and all traditional displacement hulled lifeboats) have an effective top speed of around 9 knots, so more power would simply be wasted without any appreciable gain in speed.

Internally the Solents have an aft cabin accessed via a watertight door in the wheelhouse and emergency roof hatch which housed the Radar/Radio Operator’s station and seating benches for crew/survivors. Additionally access to the Mathway Steering Box and rudder linkages, the Drogue Anchor and Heat Exchanger/Reserve Fuel tank space are afforded via this cabin. Midships is the wheelhouse with Helmsmans stool, additional crew benches, compass and engine guages. Moving forward a watertight door affords entry to the particularly (for an RNLI lifeboat) capacious engine room with the afore mentioned Gardner 6LX engines, hydraulic winch motor, battery banks and electrical systems. After walking through the engine room another watertight door opens into the forecabin that houses the anchor rope drum and through a wooden door to port is the Blakes Sea Toilet and small sink. 24v electric lighting is fitted throughout the cabins.

All of the Solent Class Lifeboats were retired from the RNLI by 1995 by which time the oldest boats were 26 years old and the youngest 23. A number of them went on to other SAR organisations (Uraguay, Chile, Australia and Estonia) while the others including ON1008 were sold into private hands.

In 1990 ON1008 in and her sister Solent Class Boat “The Royal British Legion Jubilee” were unwittingly sold out of RNLI service to smugglers and bothnhad their fuel capacity increased massively to allow a long distance range (estimated at around 1,000 miles) to be achieved. Eventually ON1008 and her sister were intercepted by UK Border Patrols, ON1008 was impounded on the Thames and her sister (with some tragedy) boarded off the coast of Scotland. ON1008 was then auctioned and became a trip boat on the South Coast of England, later she returned to the Thames being re-sold in excellent order in 1999 to a religious group who sailed up to Co.Donegal in NW Eire for conversion to a sailing reigious retreat. During this period she dragged her anchor during a Spring tide and storm surge and driven ashore.

Despite being up on the shore and listing 11 degrees to port, work continued on this somewhat ill conceived conversion, which the current owner subsequently discovered elements of which were contrary to safe and effective operation at sea. These faults have since been rectified at considerable effort and cost.  After a while, with it proving impossible to refloat her due to the inaccessible nature of location and following disagreements, she was laid up, semi-abandoned and largely left to be sporadically vanadalised by local teenagers.

In 2012/13 however she was put up for sale and after a couple of abortive attempts she was finally sold to her current owner Callum Cameron Ives in December 2013. Work progressed as quickly as the remote location, limited access and budget allowed until finally and following exhaustive investigation into potential methods, she was in August 2014 with help from a heavy digger and local fish farm tug, successfully refloated. There was found to be a serious leak in one of the four wheelhouse drain channels, which took around two days to get properly staunched, luckily the combined sealing properties of CT1 sealant, self amalgamating and aluminium duct tape proved most effective and removed the need to be towed to a boatyard located over an hour’s sailing away for repair.

Visits between 2014 and 2015 got her into running order. Luckily the previous technical manager of the conversion project was a knowlegable and efficient engineer and the engines had been well maintained with regular oil changes, other than some sticking in the fuel injector pumps the engines came back to life readily.

In July 2015 an intial one hour sea trial down the Moross Channel, through Broadwater and up the narrows to Mulroy Bay revealed that the port engine was overheating. This proved to be a blockage around the thermosat housings caused by antifreeze crystals. It was also discovered that the water pump bearing was badly worn so a day was spent locating a new one (in Coleraine, thanks B!) Finally on 8th July 2015 we sailed with a crew of five, with basic navigation and communications equipment in place. With engine revs carefully set (850 rpm Port and 900 rpm) to avoid vibrations from the partially damaged propellors, she sailed faultlessly under escort from the 47′ Watson Class Joseph Soar, (thanks B!) in beautiful weather, the 8 hours, occasionally with a following tide achieving an impressive SOG of 11.3 knots, from Mulroy Bay around Malin Head and into Portrush for the evening, where we were generously entertained by Richard and Lee (thanks guys!)

The next day she sailed up to Coleraine and a few weeks later was taken out of the water for full survey (thanks B, Richard, Connor and Coleraine Harbour A Team).

Now close to being ready for re-launching in Spring 2019, subject to final, crucial funding being in place!