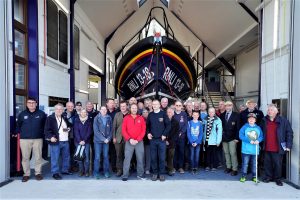 On Saturday April 13th 2019 for the first time our Annual General Meeting was held at an operational lifeboat station, specifically Llandudno RNLI Station, who generously hosted and facilitated a very successful event in their iconic, state of the art, boathouse complex located on the shore at Llandudno bay.

Thirty five Lifeboat Enthusiasts members made the journey from around the UK to attend the AGM and their support was appreciated!

Formal events started at 14:00 with an entertaining and informative talk by Alum Pari Huws (DLA at Llandudno) on the history of Llandudno Lifeboat Station, which was fascinating. 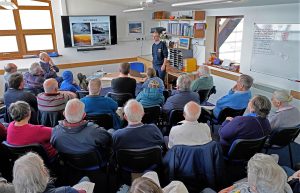 The AGM proper, chaired by Peter Woolhouse, followed at 15:10.

Following the AGM, members were given an informative tour of the station and it’s lifeboats, conducted by Coxswain Graham Heritage, 2nd Coxswain Tim James and Crew Member Simon Adey-Davies.

Station Treasurer Arthur Barlow had his two amazing scale models of the 1971 built prototype Arun Class Lifeboat, ON1018, 52-01, “Arun” and the 1990 built Mersey Class Lifeboat, ON1164, 12-06, “Andy Pearce” that was the Llandudno station boat 1990 – 2017. Both models were exquisitely detailed, even down to foldable stanchions and launching platform cable release catches!

The event was capably hosted by the station’s Visits Team, led by Myfanwy Jones.

Following the day’s activities, members regrouped and enjoyed a social evening and dinner at Dylan’s restaurant on the seafront.

The next morning, early rising members, braving a chill south easterly wind, were able to watch the launch, exercise and recovery of the station’s two lifeboats, the 2017 built, Shannon Class, ON1325, 13-18, “William F Yates” and the 2016 built, D Class, D-793, “Dr Barbara Saunderson”.

Peter Woolhouse, our Chairman, said, ” The event had been a remarkable success for all involved”

Once again, many thanks to Llandudno RNLI for hosting this wonderful event!